“Most of the east coast already has smart meters and have for nearly 15 years”…and the Utilities continue to lie to customers when asked if they in fact, have a smart meter…..Sandaura 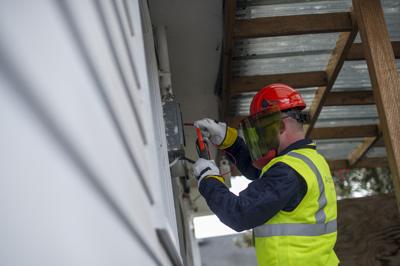 The installations began two weeks ago and will continue through the end of January.

To demonstrate how quick the process is of switching out the old meter for the new one, Pacific Power invited The World to a North Bend resident’s home on Wednesday.

“I’m looking forward to real-time opportunities of information,” said Tom Burnett as he and members of Pacific Power stood outside his home. “I used to go outside until the black line goes around so I know which item in the house is consuming electricity, but now I can time track that according to the information on my bill. … And there is a factor of staying up with technology. If we don’t keep up with the changes, we will get left behind.”

Burnett volunteered his house for the demonstration, eager to be one of the first 25,000 homes in Coos County to have a new smart meter.

According to a press release in early November, “In all, Pacific Power will replace 590,000 meters in communities across the state from now through fall 2019.”

Also present for the demonstration was Regional Business Manager Sam Carter with Pacific Power, who said that several hundred installations are happening now every day.

“So far we’ve gotten a lot of great feedback from customers about the technology, how they are able to view their energy usage hour-by-hour and find areas where they can save money,” Carter said.

Last month, Pacific Power held a community workshop to answer questions about the new meters. As The World previously reported, during that workshop Oregon Energy Green analyst Jason Turner stood next to one of the new smart meters and pointed out that 70 million have already been installed throughout the United States. Most of the east coast already has smart meters and have for nearly 15 years.

“We skipped the first three versions of the smart meter,” Turner said in a previous interview. “When you hear people talk about them, you hear about fires, but those were the early versions.”

Pacific Power once every 45 minutes. Sending that information, Turner said, will take a fraction of a second.

“It’s not a constant conversation with Pacific Power,” he said. “It’s an x-amount of minutes and says that this home used two kilowatts, then three more, or that it didn’t use anything. It doesn’t care if it’s the washing machine. It is just power that was used.”

As for the installations happening now, Carter explained that homeowners will receive pre-notification well in advance by sending out postcards and letters. Two weeks before the change takes place, Pacific Power will call the homeowner to let them know a smart meter is being installed.

“When the installer is on-site, they will try to make contact with the homeowner and give them a chance to turn off electronics that might be sensitive to power going off,” Carter said. “If they can’t make contact, they will leave a note on the door so they know it has been installed.”

A number of people have been opposed to the new smart meters, alleging that they may cause health problems such as headaches and disturbed sleep.

“We’ve tried to be proactive by holding a public workshop not too long ago to make ourselves available to answer questions,” Carter said in response to these concerns. “I attended a workshop last Sunday for Drinking Civilly and met with 20 people or so here. We’ve been available to help communicate the facts of smart meters and how safe they are.”

Customers can opt out of the smart meter installation. To do this, it costs $36 a month. Carter explained that cost supports the manual reading of the old meter that would be kept in place rather than the new standard of a smart meter.

As for the installation Wednesday, it lasted maybe five minutes. Carter said in some cases the box holding the meters are deteriorated, in which case Pacific Power would pay for a new one.

Burnett invited anyone to talk with him in a month about his experience with the new smart meter.

“Don’t be afraid of the future,” he said. “We have so many conveniences in our life, why not add one more?”