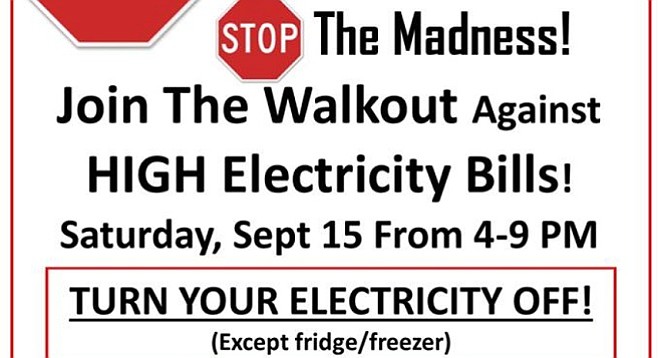 San Diegans have been shocked by skyrocketing electric bills over the last two months, with many customers being told by San Diego Gas & Electric they owe two or even three times as much as they’re used to paying. While the utility says the bill spikes are an anomaly owing to unseasonably hot temperatures in July and August, some customers are fighting back, accusing SDG&E of price gouging their neediest customers.

Ramona resident Susan Brinchman has been battling SDG&E for years, first over smart meters that she says have caused radiation-related illnesses in herself and others, and now over the company’s rate structure. While Brinchman, a retired schoolteacher, has a medical exemption that allows her a much higher baseline than standard customers (a baseline determines how much electricity a customer can purchase at the utility’s lowest price point), she’s seen neighbors hit with bills of $2000 or more, sometimes surpassing their mortgage payments.

“It’s like a desert, we have some of the highest temperatures in the county in Ramona,” Brinchman told me.. “Running an air conditioner is not optional, the heat gets so excruciating that you literally can’t be indoors.

“Existing state law says that the baseline allowance has to be based upon the reasonable needs of the average residential customer,” she continued, saying that baselines only cover about a third of the minimum electricity requirements for summers in San Diego’s arid East County.

“The baseline allowance lets you cook and turn on a few lights, that’s it,” added Michaela Wright, a Lakeside resident who, in the wake of receiving an $848 electric bill despite having spent approximately $40,000 to equip her home with solar panels, started the Stop SDG&E Now Facebook group that now counts nearly 1000 followers.

“These aren’t just and reasonable rates, which the [California Public Utilities Commission] on their own website says is required,” Wright continued. “I don’t believe a $1300 monthly bill for a 1300-square-foot home is just and reasonable,” which is what she said a friend was recently charged.

Looking to the Commission’s website, it states a baseline should be set that “meets a significant amount of the ‘reasonable’ energy needs of the average residential ratepayer.”

What exactly that entails is open to debate, but SDG&E communications manager Wes Jones says it’s intended to cover more than just a few lights and a stove.

“Baseline allowance is determined by three factors – the climate zone you live in, the time of year, and whether or not the customer has electricity and gas service at their house or just electricity,” Jones said to me in early October. “It’s not going to be all of the energy need, it’s the average amount of energy the typical household needs to run their

“Allowances do rise in the summertime as folks require more energy to cool their homes.”

Still, Jones says that baselines have been reduced for all-electric customers by 30-60 kilowatt hours per month since 2016, with monthly allowances currently ranging from 249 along the coast to 555 in the desert. The recent bill spikes are an anomaly, he said, and should start trending back down as the weather cools.

“Record-breaking temperatures have even extended into the coastal areas, from the beginning of July through the first three weeks of August we’ve had the hottest temperatures ever recorded in our service territory, so we’ve seen a heavy increase in energy use along the coastline where baseline allowances are typically the lowest.”

In August, numbers provided by the utility indicate nearly 57 percent of the utility’s 1.18 million standard service customers used more than 130 percent of their allowance, driving them into SDG&E’s second pricing tier, where the cost of electricity can more than triple. By comparison, only about a third of residents exceeded their cap in June, which Jones said was more representative of a typical month.

“I don’t care what the excuse is, people in Arizona use air conditioning, my sister in Santa Rosa says she runs her air conditioner all the time and her bill for the same period was $178,” Wright argued.

Santa Rosa is in Sonoma County, which has a community choice energy district whereby power is purchased directly by a municipality. In these instances a utility company still owns the power grid and collects a profit from delivering electricity to customers, but customers have a choice to either remain a direct utility customer or to buy power from the community program instead. Proponents say community choice is proven to hasten a switch to energy generated from renewable sources while still providing much lower costs to consumers.

Solana Beach is the first city in the county to roll out a community choice program, though similar programs are being considered in San Diego and several other cities in North County. SDG&E, meanwhile, is backing a campaign seeking to block the spread of community choice through their territory.

Both Brinchman and Wright support the idea of community choice, but there’s no plan at the moment to establish a public energy district in unincorporated San Diego County.

“I think it’s dead in the water unless the county supervisors take it up, and the only one that really cares about this is Diane Jacob,” Brinchman said. “But cutting SDG&E out of the picture is a good thing, I think they deserve it.”

“I honestly thing the CCAs are the way to go, the more I research them,” Wright agrees. “But it depends on how they’re set up – Solana Beach is more focused on green energy, so their ratepayers aren’t really saving much money. But we could set one up without as much green energy that reduces the price by quite a bit.

“I’m very anti-government, I think the government messes a lot of things up. I think capitalism is wonderful, make all the money you want but not off of services people need to live. These utilities should not be private entities, they should be non-profit and held by the public.”

Both women say they’ve also filed formal complaints about their bills to the California Public Utilities Commission, and are encouraging their friends and neighbors to do the same.

“They’re saying they’ve only received nine complaints, which means to them this isn’t really a problem. We need them to open proceedings into the matter,” Brinchman said.

Wright has gone further, encouraging electric customers who’ve switched to time-of-use rate plans (where the cost of electricity varies by the time of day it’s used) to stage “walkouts” wherein they shut down all nonessential appliances between the hours of 4 and 9 p.m., when electric rates are the highest. SDG&E, for its part, says it charges the most for energy during this period specifically because it’s encouraging consumers to avoid using energy during that window.

Wright likens her cause to that of football fans upset by players protesting racial injustice during the playing of the national anthem.

“I may not be doing the exact right thing, but I feel like if you stand by and do nothing, that’s worse.”