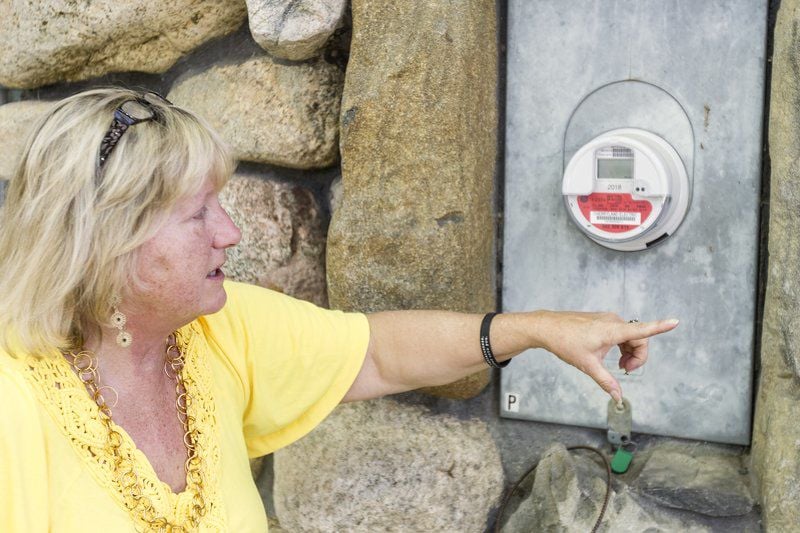 Record-Eagle/Tessa Lighty Heatherlee Yorty is being criminally charged for utility fraud after disabling her Cherryland Electric automated metering system. Yorty believes the smart meter is giving her a myriad of health problems.

SUTTONS BAY — Heatherlee Yorty contends she noticed immediate improvements to her health when she removed a pair of electricity meters from the side of her home.

“I’m going to fight it until my death,” Yorty said. “I will not lay down for these shenanigans.”

Yorty, 63, of Suttons Bay, is charged with two counts of fraudulent use of a public utility after she said she hired a private electrician to replace Cherryland Electric Cooperative’s automated metering system in favor of two outdated, analog models from General Electric.

Yorty argued electromagnetic frequencies emanating from her meters for years have caused a host of health problems. She said she was forced to relocate her bedroom to another area of the house as the invisible waves “poison” her body and make it nearly impossible to sleep without intense pain.

Yorty provided links to various websites and blogs detailing perceived problems with the technology but no formal scientific consensus has been reached.

Cherryland officials are puzzled by Yorty’s claims that her meters caused harmful side effects. Johnson said most customers have praised the meters for their ability to better monitor their electricity usage. And they’ve saved the company a lot of cash in the last decade.

“We have absolutely no scientific data to support that argument,” Johnson said.

The meter removal itself wasn’t criminal, according to police reports. The issue instead stemmed from the brief period where Yorty’s energy usage went untracked in Cherryland’s system. Officials there could only estimate how much she needed to be billed after the switch, reports state.

Yorty — released on a $5,000 personal recognizance bond ahead of her next court date — said she plans to hire an out-of-state attorney to fight the charges. She maintained her analog meter still tracked her energy usage regardless and noted her intention to sue both Cherryland and the county.

Johnson said Cherryland doesn’t have a legitimate reason to allow customers to use alternative meters or revert back to analog models. Those receiving their energy through Cherryland are required to use the latest technology, she said.

“We’ve had this metering structure for 10 years,” Johnson added. “I can’t overstate the amount of positive feedback we’ve had from our membership in terms of the data they’ve had access to and the fact that we don’t have to drive around reading their meters anymore.”

Yorty — who fired her court-appointed attorney after her last court appearance — could have her criminal case dismissed when it returns to 86th District Court for a motion hearing on May 29. Assistant Prosecutor Tristan Chamberlain declined to comment.

Don’t ask the FCC…….IF YOU WANT THE TRUTH ABOUT THE DANGERS OF SO CALLED SMART METER TECHNOLOGY

5G Is Great Until It’s Sitting in Your Front Yard