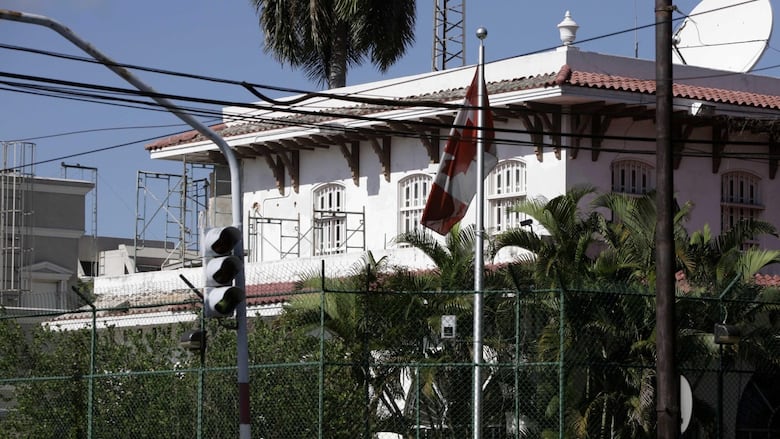 The Canadian embassy in Havana. Canada has told its diplomatic staff there that they will no longer be able to have dependents with them during postings in the country. (Franklin Reyes/Associated Press)

Canada is designating Cuba an “unaccompanied post” — meaning diplomats’ families will not be allowed to live with them in the country during a posting — because of new information about mysterious symptoms suffered by Canadian and U.S. diplomats and their families.

Canadian diplomatic staff in Havana were informed of the decision Monday morning. The federal government has made arrangements to bring family members home in the coming weeks.

Ten Canadians in Cuba have experienced symptoms — including headaches, dizziness, nausea and difficulty concentrating — according to government officials who briefed reporters in Ottawa Monday.

‘A new type of … brain injury’

A new report by a Canadian medical specialist raises the possibility that some of the Canadians have experienced a “new type of possible acquired brain injury.” A senior government official said that this injury is new to science.

“The cause remains unknown but could be human-made,” said a media release from Global Affairs.

Dr. Douglas Smith, director of the Center for Brain Injury and Repair at the University of Pennsylvania’s Perelman School of Medicine, has evaluated 24 affected Americans and found their symptoms similar to those of a traumatic brain injury.

This is something that looks like persistent concussion symptoms — in individuals that have no history of head impact,” he said in an interview. “And yet they look almost exactly like the patients we would see in an concussion clinic.​

​”The biggest complaint of all was cognitive dysfunction,” he said, explaining that people he examined were slower to process information, struggled with memory, and found it difficult to find the right words when writing or speaking.

Officials said that some of those who seemed to recover have since seen the symptoms reassert themselves.

The RCMP is investigating the illness reports.

Some of the affected Canadians are minors; officials did not say how many, citing privacy considerations. Canadian diplomatic staff and their families don’t live together in any kind of housing compound, which closes off one possible avenue of investigation.

There is still no clear explanation for the illnesses. The government says theories about sonic attacks and forms of illness with psychological origins have been ruled out. An environmental assessment conducted April 4 found no suspected causes.

The most likely explanation appears to be medical, said a senior government official. The government said it has seen no indication that Canadian tourists in Cuba are at risk.

Staff members at the embassy will be given the option of postings elsewhere.

The decision to pull family members from the Canadian Embassy comes after months of reports of mysterious illnesses afflicting foreigners in Cuba.

As of this month, the American Embassy in Havana has just 10 diplomatic staff left after the United States pulled out the rest of its people following what it described ominously as “sonic attacks” on staff members.

Canada already maintains multiple unaccompanied diplomatic posts around the world, including those in Kabul and Tripoli.

Why you could be next target of the smart meter hard sell: We hand dossier of complaints to the energy watchdog

By Dan Hyde and Sara Smyth for the Daily Mail

Money Mail has handed the energy watchdog a dossier of damning complaints about the bullying tactics suppliers are using to get homeowners to install smart meters.

Our file contains dozens of letters and emails from readers who have been hounded and misled into thinking they are obliged to ditch their old gas and electric analogue meters.

Your evidence shows suppliers are continuing to tell customers that it is a ‘legal requirement’ to have a smart meter fitted — even though, by law, homeowners have the right to decline the new technology, which records your electricity usage minute-by-minute and submits readings to your supplier throughout the day.

Around four in ten of the complaints in the dossier were about E.ON. The firm promised in October to stop claiming smart meters were compulsory, but letters sent to customers as recently as March 31 say: ‘It’s time for your smart meter to be replaced. It’s a legal requirement and we want to keep you safe.’

EDF (one in seven complaints) and First Utility (one in ten) were other frequent offenders, with the seven worst culprits completed by SSE, British Gas, ScottishPower and Npower in that order.

The file also contains evidence of new tactics to push the meters.

For example, Utility Warehouse told customers their meters had reached their ‘use-by’ date and ‘may stop working safely or could cut off the energy supply’ so must be replaced by a smart meter.

Our Stop The Smart Meter Bullying campaign, launched last week, is calling on energy regulator Ofgem to set strict marketing rules to stamp out these moves.

In response, an Ofgem spokesman says: ‘We thank Money Mail for providing us with further insight into people’s experiences with smart meters. We are monitoring the roll out and are in contact with suppliers.’

In another development over the past week, we can reveal that suppliers may start bombarding customers who have already said no to updating their meters.

This is because the Government is issuing contradictory statements about whether suppliers are obliged to offer or actually install smart meters over the next few years.

Energy Minister Claire Perry says the Government is ‘committed to ensuring that all domestic and small business consumers are offered the chance to upgrade by the end of 2020’.

But the official Supplier Licence document, which gives gas and electric companies the right to operate in the UK, states: ‘The license must take all reasonable steps to ensure that a Smart Metering System is installed on or before December 31, 2020 at each designated premises of which it is the relevant electricity/gas supplier.’

Suppliers are continuing to tell customers that it is a ‘legal requirement’ to have a smart meter fitted — even though, by law, homeowners have the right to decline the new technology

Even Smart Energy GB, the group set up to promote the smart meter roll out, has confusing statements on its website. Under the heading ‘About the roll out’, it states the Government ‘wants energy suppliers to install smart meters in every home in England, Wales and Scotland’ with ‘the goal of every home having a smart meter by 2020’.

Yet lower down it states: ‘The Government requires energy suppliers to offer smart meters to all homes and small businesses across Great Britain by 2020, but whether you accept them is completely up to you.’

Insiders at Big Six energy firms told Money Mail that unless the Government clarifies the rules, they will act as if they need to install a smart meter in every home by the end of 2020, as they will face fines of up to 10 per cent of their global sales — which could mean £7 billion — if they fail to hit the targets.

Firms also said that nobody in the Government or energy watchdog has made it clear to them what the words ‘all reasonable steps’ and ‘offered’ mean in practice.

A source at one firm said: ‘We need clearer guidance on what is and isn’t acceptable — if a customer says no, is that good enough to tick them off our list?’

Money Mail’s campaign calls on the Government to relax the rules around the 2020 deadline for installing smart meters in homes.

We have asked the Department for Business, Energy and Industrial Strategy to clarify what it expects from suppliers. Industry insiders say that if the Government made it clear firms need to only ‘offer’ a new meter to customers — and that they can stop hassling people who refuse — suppliers would put less pressure on households.

Around four in ten of the complaints in the dossier were about E.ON despite the firm promising in October to stop claiming a smart meter was compulsory

Over the past week, Money Mail has discovered that new analogue meters may soon be unavailable to customers because manufacturers are beginning to stop making them.

The smart meter roll out was not designed to eliminate analogue meters from the market, but energy provider ScottishPower says that is happening anyway.

An E.ON spokesman says: ‘By the end of this month, we’ll have updated all of our correspondence to make it clear that customers can contact us if they don’t want to have a smart meter installed.’

A Utility Warehouse spokesman says: ‘Our members still have a choice whether to accept or decline a smart meter.’

Energy UK says: ‘We are working with suppliers to develop a set of good-practice principles for communications on the smart meter roll out.’

Robert Cheesewright, director of policy and communications at Smart Energy GB, says: ‘The Government’s goal is that every household has a smart meter installed by the end of 2020. There’s no obligation for anyone to have one as we make clear on our website.’