In a newly published paper in IEEE Access, cell phone modeling experts reveal that toddlers receive far greater microwave radiation from cell phones than previous research models assumed. The maximum SAR values, a measure of cellphone radiation, in young children’s head tissues were up to 78% higher than SAR values measured in the adult model. The IT researchers call for lower cell phone radiation regulatory limits to account for young children’s exposures, echoing recommendations from the American Academy of Pediatrics to the US government to update cell phone regulations to protect children.

Researchers from the University of Queensland Australia School of Information Technology and Electrical Engineering compared cell phone microwave radiation exposures of adults to infants and toddlers who are three months to three years old. The experts evaluated various scenarios where parents might hold a phone up to a child’s head and computed the cell phone radiation exposures into the child’s skin and brain tissues. Confirming earlier studies by experts at the University of Porto Alegre and Environmental Health Trust (EHT), they found that cell phone radiation reaches further into younger children’s brains than previously estimated.

“Children are not little adults. This research highlights long raised documented evidence that cell phone radiation test systems are outdated and inadequate to properly evaluate children’s cell phone radiation exposures,” stated Aly Cohen, MD, co-editor to the recently published Integrative Environmental Medicine which includes a Chapter on Microwave Radiation and Human Health and provides practical recommendations to clinicians. “Most research investigating younger children’s exposures have used a scaled down adult model rather than an anatomically correct child sized brain models and this study not only used realistic head models, but it is the first to evaluate exposures to such young children.”

Researchers in this study used state of the art scientific modeling technology to simulate the absorption of electromagnetic energy into the head of a child at 3 months, 6 months, 12 months, 18 months, and 36 months of age. The study used realistic head models that were anatomically based to the child’s stage of development, reflecting the different electrical properties of specific tissues in a child at 3 months old in comparison to a child at 3 years old. Researchers found that the electromagnetic radiation absorption values in the head increased as the age of the child decreased.

“Smartphones should not be placed near children’s brains,” cautions University of Utah Professor Om Gandhi, who is one of the original developers of cell phone test systems and Senior Advisor to EHT. Over the last two decades, Gandhi and colleagues have published multiple research papers on how children are more exposed to cell phone radiation than adults. “This research is significant because cell phone radiation modeling of young children’s exposures is not a part of the current premarket regulatory process. Instead, manufacturer test systems only simulate exposure to a large adult male sized test dummy. This system is flawed.”

“If we consider this study in light of the test results just released from the French government that found the majority of cell phones exceed regulatory limits for cell phone radiation when tested against the body, then we can expect that the  radiation levels in children’s brains far exceed regulatory limits when parents hold the phone directly up to the toddler’s head. Urgent action is needed,”  stated Dr. Devra Davis, President and founder of EHT. Davis pointed out that researchers in this study tested the radiation exposures with the phone at a 10 mm to 30 mm separation from the child’s head. “If the phone were placed in direct contact with the child’s head, with no separation, the levels would be far higher.”

“Many parents will hold the cell phone up their baby’s head to listen to out of town parents and grandparents. Cell phones are laid in cribs streaming music and nighttime stories to our youngest children,” stated Theodora Scarato, Executive Director of EHT, who points to the recently signed 2017 Nicosia Declaration as an example of the medical associations worldwide who are calling for urgent action. In the United States, the American Academy of Pediatrics has issued practical recommendations to families to reduce children’s cell phone radiation exposure.

The researchers conclude, “Our investigation shows that previous studies, which used scaled head models without considering the age-dependent variations in the head anatomy and/or age-dependent tissues’ dielectric properties, underestimated SAR levels in the children’s heads. The obtained results using the developed realistic head models indicate that for young children, a lower limit on radiated power might be required to meet the acceptable dosimetry levels.”

The paper entitled “Evaluation of children’s exposure to electromagnetic fields of mobile phones using age-specific head models with age-dependent dielectric properties” has been published in IEEE Access and can be accessed at http://ieeexplore.ieee.org/document/8086149/. 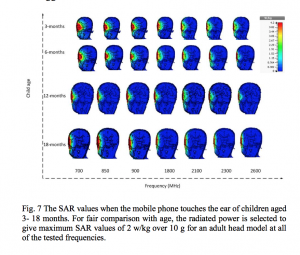 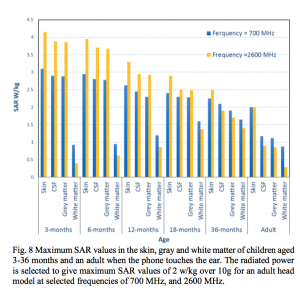 Which Would Provide EMF Training And Insurance Coverage

After Cecelia Doucette’s testimony, and Dr. Lisa Nagy, Government Liaison for the American Academy of Environmental Medicine, the elected officials asked questions. This Bill is one ofSEVEN EMF Bills in consideration by the Massachusetts legislature.

This update comes from Cecelia Doucette of Understanding EMFs