We tested our WiFi router, our electric company’s smart meter, a Samsung Galaxy smart phone, a microwave oven, and our laptop with an Extech 480386 EMF meter and compared our results with commonly accepted safe or healthy levels of radiation found at http://www.bioinitiative.org, and here’s what we found.

Some sort of EMF Radiation is emitted by all technical equipment or devices that produce Electromagnetic Fields – that’s basically anything that gets plugged in or runs on a battery. Power lines, radar systems, communication towers, cell phones, cordless phones, WiFi routers, ipads, TVs, computers, gaming consoles, all produce EMF radiation.

Here’s where it gets interesting — all EMF Radiation has an effect on the human body. The question is whether it’s a negligible or a negative effect, and to what degree.

Presentation by Dr. Devra Davis. Men, get cell phone out of pocket. Women, get it out of your bras. ALL adults, get this technology away from children.

February 20, 2016 in -Mailing List, The Science Media Centre model of science communication, Tobacco science and the art of spin by EMFacts

Powerwatch in the UK has just posted an excellent piece covering the recent Catalyst program by Maryanne Demasi. It seems the Science Media Centre in the UK is spinning as well. To briefly quote from Powerwatch:

“On Monday 15th February 2016, the UK Guardian newspaper posted an article by Maryanne. Then on Wednesday 17th they published an opposing piece by a Dr Grimes”

Dr David Robert Grimes is a young physicist and cancer researcher at Oxford University. In 2014 he jointly won the John Maddox Prize present by the Sense about Science Charity. They, along with the Science Media Centre, claim to present scientific truths to the public. In reality they always seem to support the ‘Establishment view’ and do their utmost to prevent any safety questions being raised about man-made chemicals, radiation, EMFs, vaccines, etc. The Science Media Centre even specialises in ‘lock-in journalist briefings’ where organisations can Press Release their work to a hand-picked list of journalists along with a panel of hand-picked supportive scientists to answer questions. Experts with differing views wanting to ask legitimate challenging questions are completely excluded from these events. The briefings are usually timed so that they finish late morning and there is no time for the journalists to make other investigations before filing their stories for the mid-day news. This is an extreme form of professional spin that distorts rather than helps humanity understand scientific and technological developments. Science Media Centres now exist in various countries. See Sourcewatch for some more background information about the SMC network.

PG&E claim: “Independent and leading international health experts have tested and determined this technology is safe.”

However: “A group of 40 international experts rebutted claims of no increase of cancer from exposure to low intensity EMFs.” In fact, “only a few studies reported no elevations of cancer and most were funded by the wireless industry.” A professor of nuclear policy at the University of California at Santa Cruz stated that these intense millisecond bursts can produce severe biological effects. Also a letter issued by the Board of the Academy of Environmental Medicine referred to an Australian Scientific Study of 92 case series that “clearly demonstrates adverse health effects in the human population from Smart Meter emissions.”

Now on to my story which reflects the professor’s statement — “can produce severe biological effects.” A Smart Meter was installed at our home on June 10, 2010. My wife has, for years, experienced occasional migraines, about one a month. After the installation of the Smart Meter she started experiencing more frequent and intense migraines. Finally, in 2013 I started keeping accurate track of her migraines – 55 in 2013 (up to nine in one month), 47 in 2014 (up to six in one month) and 13 in the first four months of 2015 (up to six in one month). We had the Smart Meter removed on May 6, 2015. Since then she experiences about one migraine a month — back to her experience before the Smart Meter was installed in 2010.

Before, during and after the Smart Meter experience we had no changes in our lifestyle nor were there any appliance or electronic devices changes or additions.

My PG&E contacts have been quite courteous and polite, but I have seen no follow up or actions taken. Months ago a PG&E supervisor said he would try to get some type of adjustment/relief to offset our $10 per month meter reading charge — never heard another word. Recently I tried to call the Opt Out Smart Phone 800 number to ask about the new monthly charge policy. I was on hold over 10 minutes in each of my four calls. I went to the local PG&E office and was given the phone number of an Opt Out Supervisor. I called regarding my question about the change in monthly charge policy (charging $10 per month even though the meter was only going to be read every other month) and if there could be a forgiveness on the charge since my wife has a health issue with the Smart Meter. He said he would get back to me about the first issue and he would contact another supervisor regarding the second forgiveness issue. It has been about two weeks and I have not heard from either person.

I close by requesting the government entities mentioned at the beginning to ban Smart Meters in Nevada County and have no increases in charges/billings by PG&E because of the ban.

On February 6th, I had the opportunity to speak at TEDxBerkeley. The title of my talk was “Wireless Wake-Up Call.” I discussed the health effects related to the explosion in wireless technology the past few years, along with solutions that can help everyone. Within the presentation, I also talked about how we can develop technology that is much safer for humanity. Here is the video:

The following are a few pictures and experiences from that day:

Zellerbach Hall on the UC Berkeley campus is an incredible venue. It seats 2,000 people and this event was sold-out. I was the second speaker of the day and the first couple minutes on stage were a bit nerve-racking. As you will see in my opening questions, there was an uncomfortable moment for everyone (it felt like the entire room needed to pause). It happened when I asked who knew that the fine print in every smart phone owner’s manual says to never put the phone within about 1 inch of the body. This is a truth that is currently taboo to discuss in our society, so few people know about it. However, once we got through this moment, the talk soon became fun and was well-received by many in the audience. 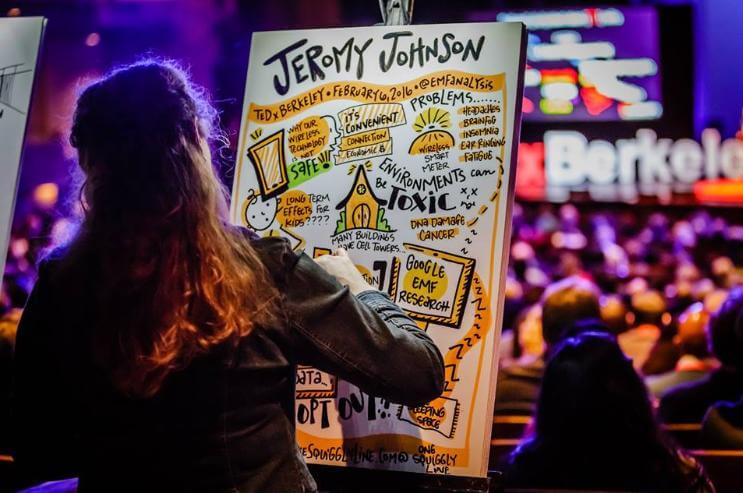 TEDxBerkeley hired artists to put each talk into images. It is such an incredible skill to do this in a short amount of time. Every speaker that day gave an amazing talk (it was so much fun to watch the other talks) and each presenter was given the painting of their talk as a gift that evening. 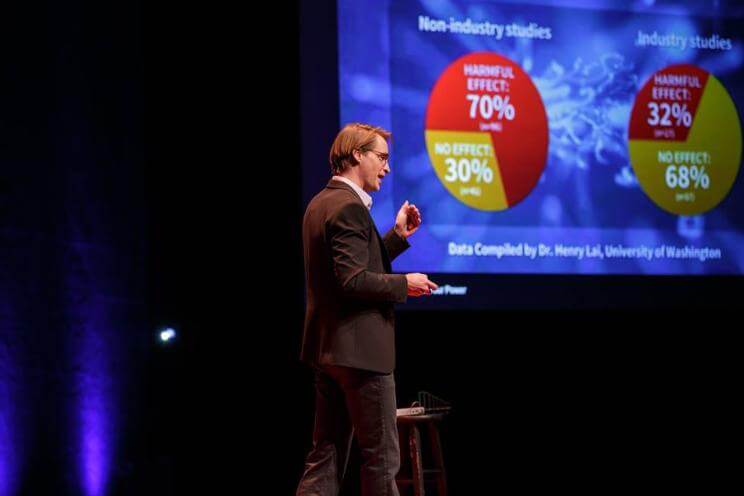 In my talk, I wanted to convey that people are indeed being harmed by this technology and that there is adequate science to show how and why this is happening. Most importantly though, I provided solutions that every family can utilize today to reduce their exposure and encouraged us all to help society wake-up. Once this happens, our technology industries will create safe products that will move our entire society toward a healthier future.