SAGINAW TOWNSHIP, MI — A lawmaker from the Saginaw area says a Michigan Court of Appeals judge made the right decision in questioning the fees associated with “smart meter” technology being installed by utilities in the state.

“To require a customer to pay for a new meter, even when their analog meter is in working condition, shows blatant disrespect for the struggling families in Michigan,” Kelly said.

The MPSC issued an order in 2013 setting the fees that Consumers Energy can charge customers not wanting to participate in the smart meter program or wanting an existing smart meter removed for more traditional technology.

Those proposed fees were as follows:

For opting out prior to installation: A one-time charge of $69.39

For removing an existing smart meter: A one-time charge of $123.91

To cover ongoing costs associated with opting out: $9.72 per month

Smart meters are digital devices that have two-way communication capabilities with Consumers Energy electrical operations staff. The digital meters provide an upgrade for the new “smart grid” that is being rolled out across the nation.

Michigan Attorney General Bill Schuette argued to suspend Consumers’ smart meter program, saying the costs to customers outweigh the benefits. Schuette filed an appeal of the MPSC order to the Michigan Court of Appeals in 2013.

Consumers Energy claims smart meters will save the public money on their utility bills.

But in his July ruling, the state judge called the argument “inherently illogical,” pointing out that Consumers plans to add millions of dollars to its base rate to fund the program.

Kelly said he agrees with Schuette that utility customers should be given a choice to opt-out of smart meter technology without an economic penalty.

“Many of the constituents are asking how the utility companies are justifying the replacement of all the current meters with more expensive units when they have not proven that there will be a cost savings with the switch,” he said.

Though he did not agree with the proposed fees, Kelly said he finds it encouraging that the Public Service Commission will delve deeper into both the financial issue and customer concerns on data collection, privacy and cyber security.

“With our electrical grid vulnerable to cyber-attacks, it only makes sense to try and safeguard our citizens with the introduction of this technology,” he said. “Smart meters are not immune from hacking and the sophistication of criminals has risen to a level of great concern. The ability of these meters to work remotely poses a greater threat than ever before and our constituents deserve the reassurance that their data will be secure.”

The state representative said he believes legislation is warranted in this case to ensure consumer choice.

Kelly was first elected to the Michigan House of Representatives in 2012, and re-elected to a second term in November 2014.

He represents the 94th State House District in Saginaw County. The district is comprised of the city of Frankenmuth and the townships of Albee, Birch Run, Blumfield, Frankenmuth, Swan Creek, St. Charles, Taymouth, Thomas, Tittabawassee and Saginaw.

August 4, 2015 in -Mailing List, Corporate influence on Science, government and the military, Literature reviews, Tobacco science and the art of spin by EMFacts

For some months the International EMF Alliance (IEMFA) has been examining the activities of the SCENIHR working group on Potential health effects of exposure to electromagnetic fields. This supposedly expert group has given the all-clear to telecommunications technology. What stands out with SCENIHR’s risk assessment process is a striking lack of pluralism and transparency. The analysis by a number of IEMFA members has found that SCENIHR’d expert opinion is strongly biased towards corporate, military and economic interests with a strategic need for wireless techniques.- Or as I would put it, SCENIHR follows a classic Procrustean Approach.

Following are links to IEMFA’s assessment of the SCENIHR spin.

Please see enclosed complaint to the European Commission on the SCENIHR Report, as a follow up of our press release in March 2015. If you want your organisation to sign, send a message to mona@stralskyddsstiftelsen.se

Complaint to the European Commission SCENIHR 2015

The state Department of Public Service has approved seven utility-of-the-future projects that are part of the state’s reform of the state’s energy markets – although a pilot program designated for Clifton Park was not OK’d.

The approved projects include a plan by National Grid to install 5 kilowatt solar panel systems on 100 residential rooftops in the Fruit Belt neighborhood on Buffalo’s east side, near the Buffalo Niagara Medical Campus.

National Grid had also submitted a request to do a REV pilot program in Clifton Park that would give customers the option of fixed rate plans that would be based on their historic consumption and energy efficiency upgrades to their homes. That project was not approved yet is among five proposals that the DPS is asking National Grid and other utilities to revise.

“The Clifton Park Smart Grid project continues to be under review. The (DPS) has indicated that this proposal does represent a REV project that is relevant and innovative, but requires further review and assessment,” National Grid spokesman Patrick Stella told the Times Union Tuesday. “We will await further direction from (DPS) staff as the process continues and work with them to move the project forward.”

PSC spokesman James Denn said the DPS is still reviewing three National Grid projects that did not get approval, including the Clifton Park pilot project.

The utility says that revenue from the sale of the electricity from the solar panels will be used to provide a monthly credit to 150 residential customers in the poor Fruit Belt neighborhood that would come out to between $17 to $20 a month. That’s about 20 percent of the typical electric bill. The average household income there is about $23,000, well below the average for the city as a whole. The neighborhood has 2,000 people on 36 blocks.

The state is moving toward a significant restructuring of how utilities operate under a program called Reforming the Energy Vision, or REV. Under REV, utilities will essentially open up the electrical networks to new technologies and potential services that are designed to reduce energy costs and pave the way for new renewable energy sources.

“Some like to pit the environment against the economy as if it’s one or the other,” said Richard Kauffman, Gov. Andrew Cuomo’s energy chief said Tuesday. “These demonstration projects provide another illustration of how New York is proving that premise wrong through innovative new business models that reduce carbon emissions by animating private investment in clean energy. New York is directly taking on the challenge of finding solutions to fix a costly and inefficient energy system in order to benefit consumers and protect the environment.”

Letting the study of infrasound done at his Blacksmith Shop Road home speak for him, Neil Andersen offered his evidence to the Joint Committee on Public Health.

Andersen showed committee members this chart representing the indoor infrasonic sound recorded at his house. The readings were taken as part of a study performed by Noise Control Engineering 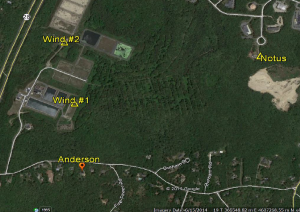 .NCE can unequivocally state that the infrasonic signature captured inside the Andersen residence with the wind turbines operational is 100% attributable to one or both of the Town’s Wind Turbines. To put the conclusions more commonly, this study finds that the wind turbine(s) produce acoustic emissions which are “acoustically trespassing” into the Andersen home.

“This is what is aimed at me,” he said. “We need an independent study to show it is not just us.”